How I Made a (faux) Pleated Lamp Shade 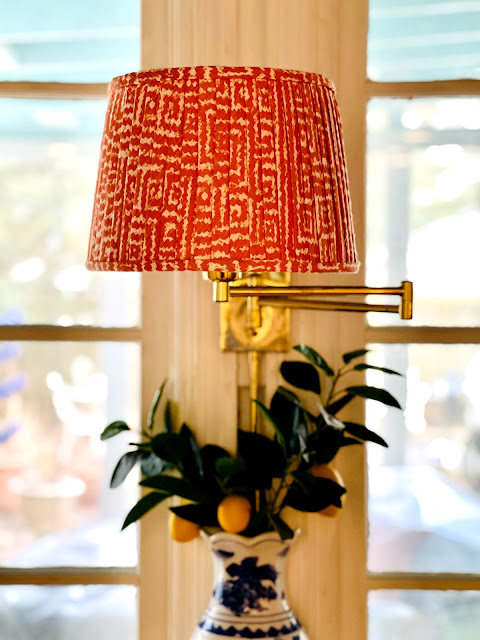 It looks like the real deal! Except it is no-sew and easy to create!
I love the new interest in pleated shades.
I remember going to the cute little cottage in Buckhead that housed Pierre Deux
when I was in college and looking longingly at the pleated shades
made with Provencal prints. (That dates me for sure!)
They were pricey. The pleated shades we are seeing again are a bit pricey for me - as they should be because they are made with beautiful fabrics and are quite labor intensive. 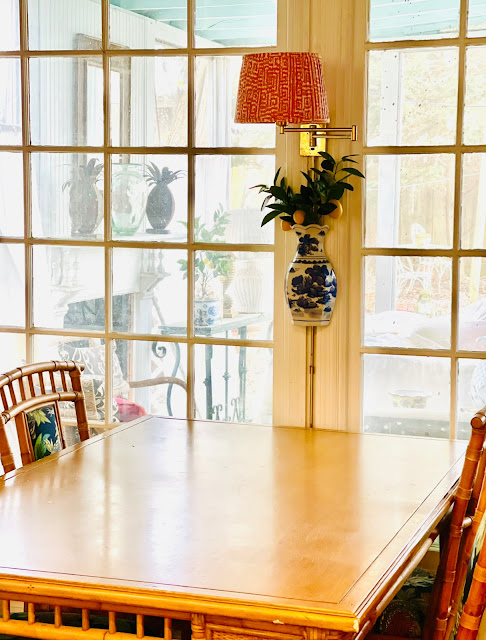 I googled how to make a pleated lamp shade and it was way too "sew-y" for me but if there is a way to pull something off with scissors and a glue gun then I'm in. I saw a couple of how-to's using bias tape to wrap shades. I investigated how to create bias tape from my own fabric (I'm very remedial when it comes to sewing knowledge but it's all out there for the "googling") and then proceeded to adapt the wrapped shade process.
Here is what I did:
I had a small dingy shade on a brass lamp in the kitchen.
I had been wanting to cover it for ages and if I messed this up it needed replacing anyway. 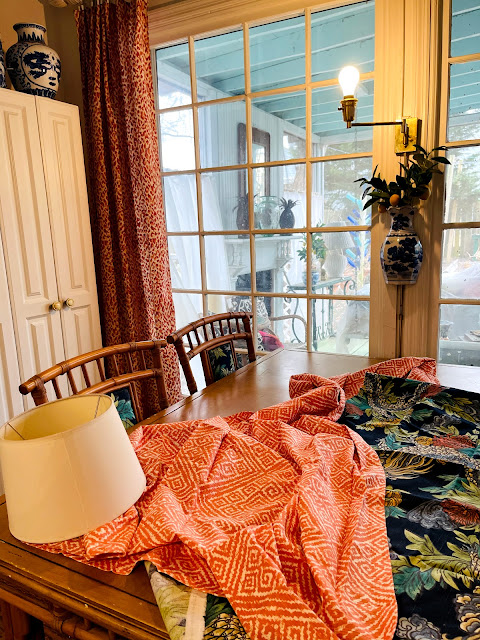 I had a scrap of the fabric that I used to cover my chairs. It takes a bit of fabric to create the bias strips and I wasn't sure I had enough. I can't get it anymore so I couldn't start and then run out. Also we use this lamp to light our kitchen table (no overhead light) and the navy background might affect the amount of light coming through the shade.
I really had no idea if this was going to work and I had this Threshold curtain panel that I bought at GW for $1.99 ages ago. Buying curtain panels at thrift stores is a great way to get large pieces of fabric for very little cost. The color and pattern size would work well in my kitchen 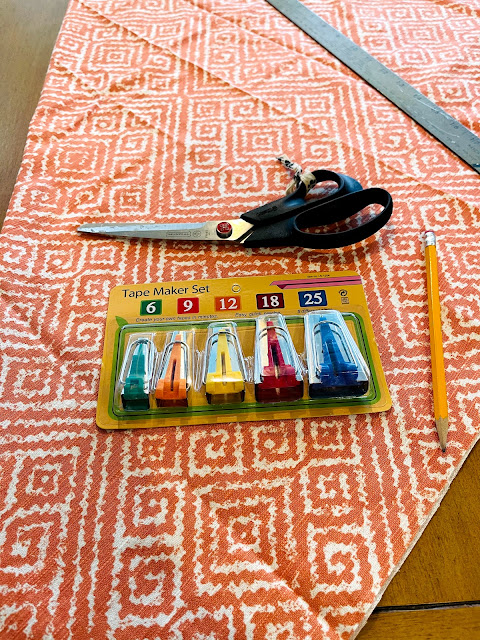 I used a metal ruler, a pencil and fabric scissors.
I purchased this very handy set of bias tape makers from Amazon for about $5.00.
You could cut strips and iron them without this little tool but it would take a long time. You need a lot of strips. This tool paid for itself in time and ease. And I'm pretty sure I'll be making another shade or two - it was that easy. And fun. 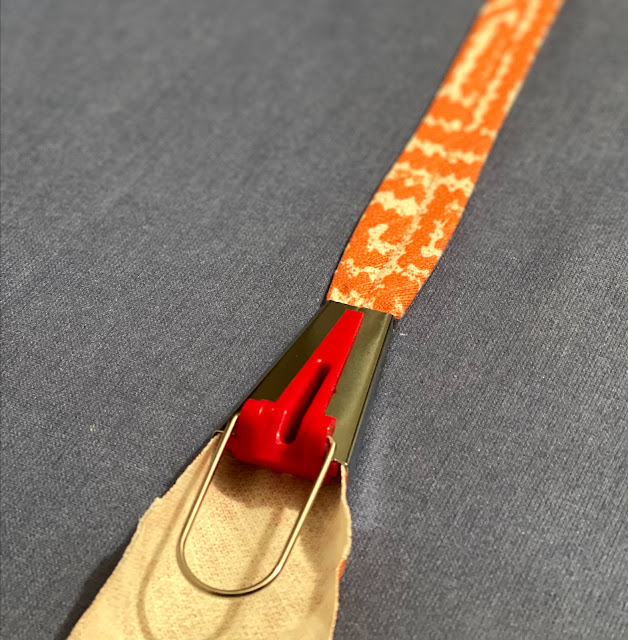 It came without instructions. For real. And I'm a novice on this kind of thing. So I googled it. Very simple and you create uniform, creased bias strips every time.
I decided which size strip I wanted to create and following the google info on how to cut fabrics on the diagonal for bias strips I cut one as a test. I didn't want to cut all of my strips and them be the wrong size. I used about a 48" square of the curtain fabric cut on the diagonal. I used about half so I could have done a pair of these small shades with that one piece of fabric. 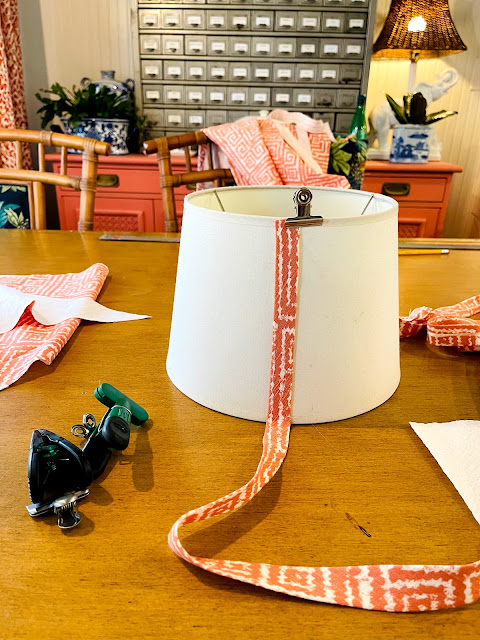 Once I tested my strip making and liked the width I made a couple strips and started gluing using my simple, nothing fancy glue gun.
I put a thin line of glue at the top edge of my shade and pressed the strip into it. I used a simple clip to hold it in place to cool. 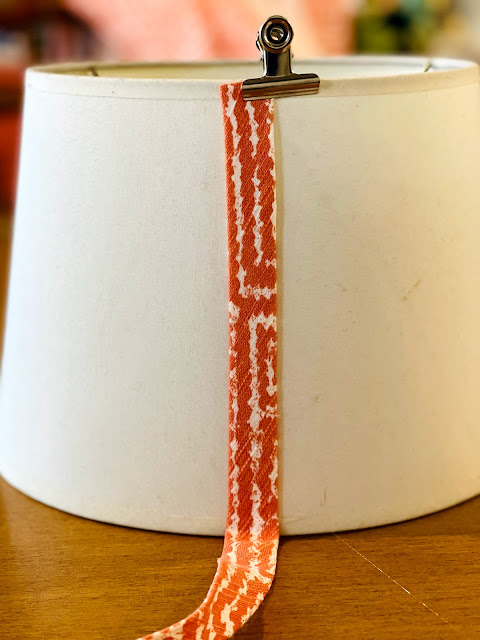 I pulled the strip straight down. The bias strips have a bit of stretch - and forgiveness - which is why they are key to making this project turn out. Because of the stretch I pulled the strip gently before I glued it at the bottom. I didn't want it to be too tight but I didn't want the strip to sag because of the stretch. Using the clip helped with this step.
Then I cut the strip off at the bottom even with the bottom edge of the shade. I decided to use do this instead of wrapping around the shade for a couple of reasons. First, it would block more light to have a double thickness of fabric on the shade. Second, it would take a lot more fabric to make all of those strips and I thought there would be more waste because of how the strips need to be glued down. 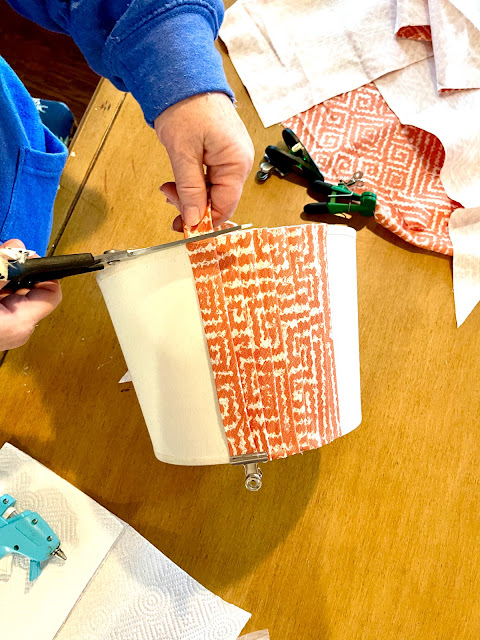 Using this method I barely had any wasted fabric. 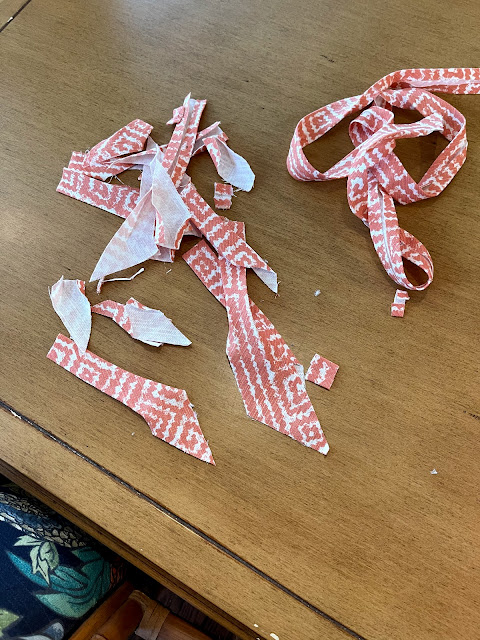 (Those were the scraps left at the end of the project!)
Also, if you wrap around the shade you have to work around the metal frame wires.
My method is simpler. 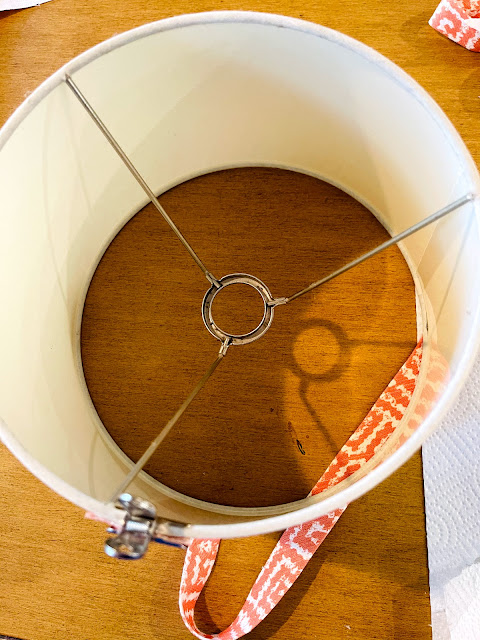 The rest is easy. You just keep gluing strips moving around the shade.
I overlapped about half the width of my strip. I thought this looked the most like the "real" sewn pleated shades and it was enough of an overlap that you can't see any of the shade peeking through from the side. Pulling the strip slightly like I mentioned above also helps with this. 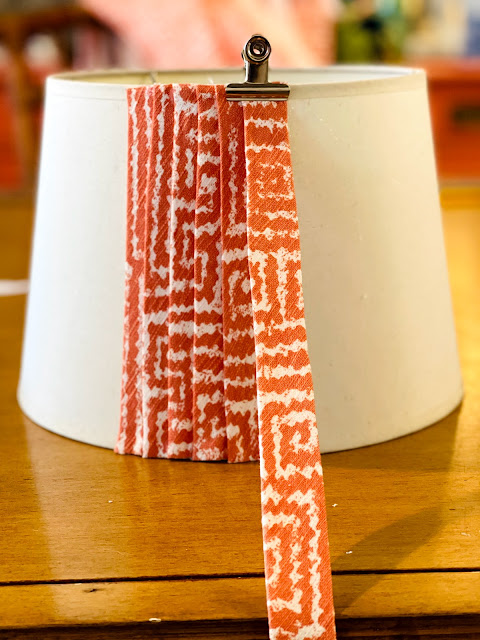 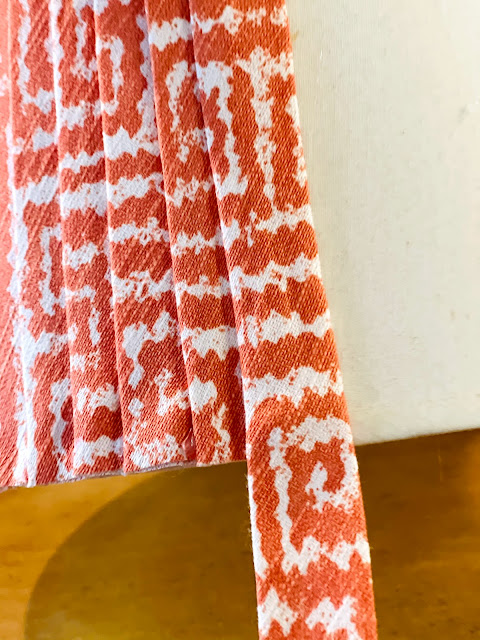 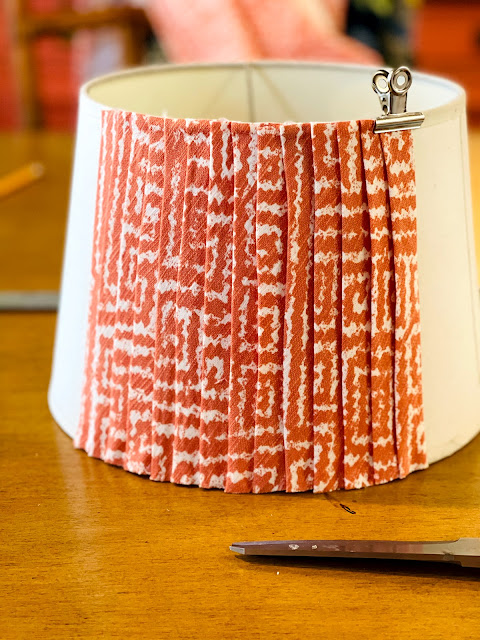 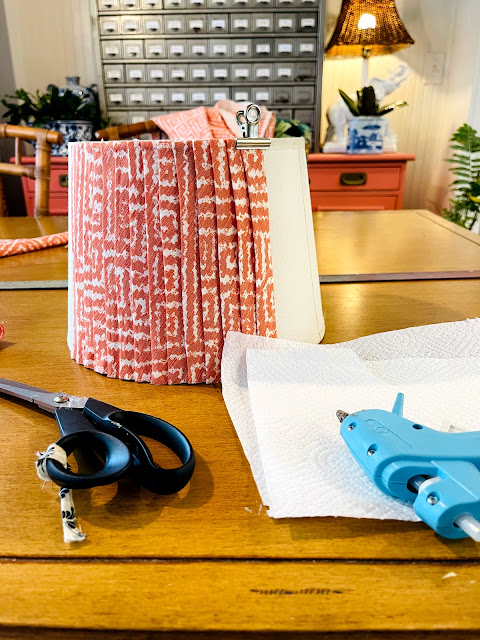 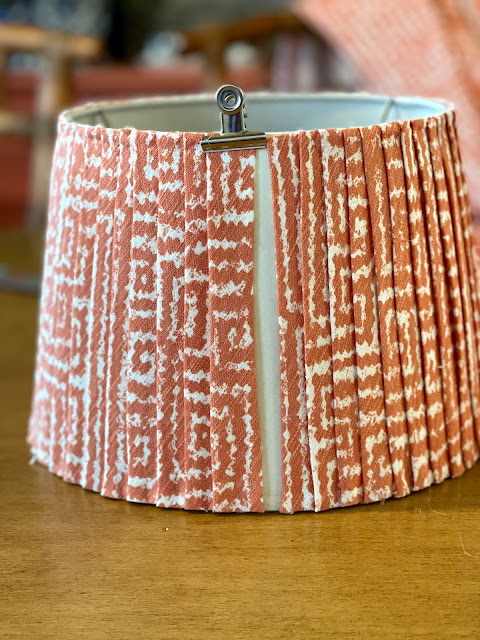 You can barely see it but you would want this to be at the back of the shade. This is also the point where you will start and stop the top and bottom trim pieces to finish off the shade. 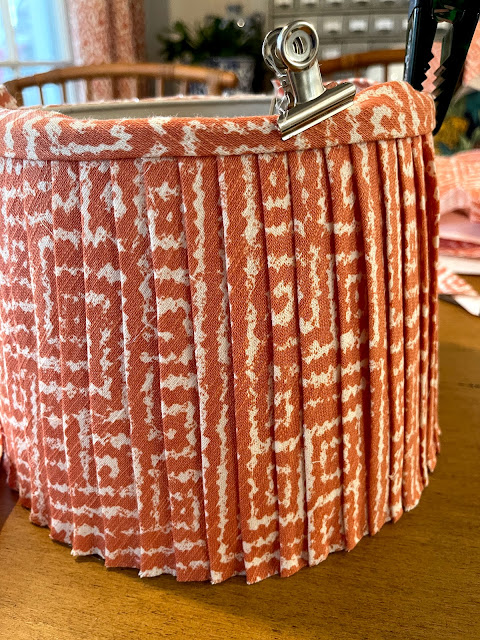 To finish off the top and the bottom you want to use a long bias strip so that you don't need to piece it. On a larger lampshade you might have to use 2 pieces so those could be sewn together or glued together. You just want to think about where the seam will be. 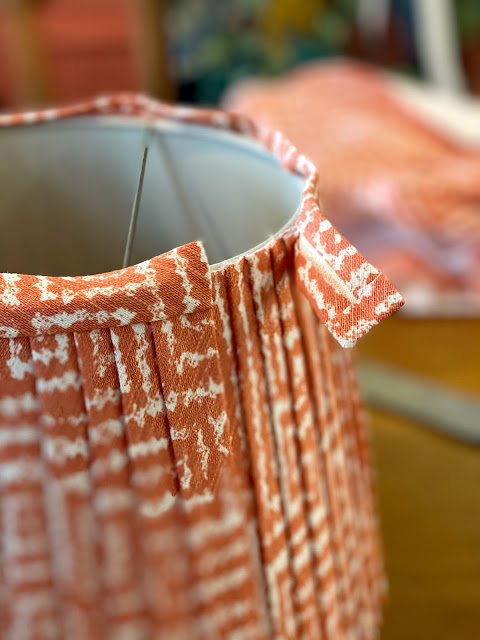 I glued the strip to the front side first. I used the inside fold line to help me keep it straight.
At the end I folded the raw edge under and glued it down. 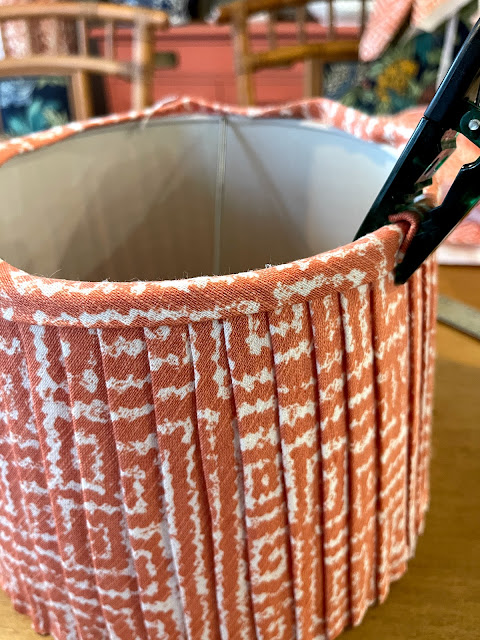 Then I put glue along the edge of the fabric and rolled it over the top edge
and clipped it down to dry.
I just did about 2 inches at a time. 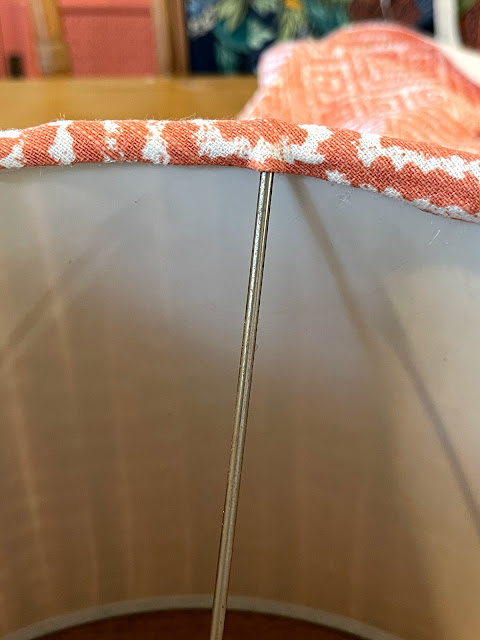 Just smooth it over the wire frame. This isn't hard you just have to do a small section at a time so that you can be sure you don't have any bumps or puckers. The bias strips are very forgiving. 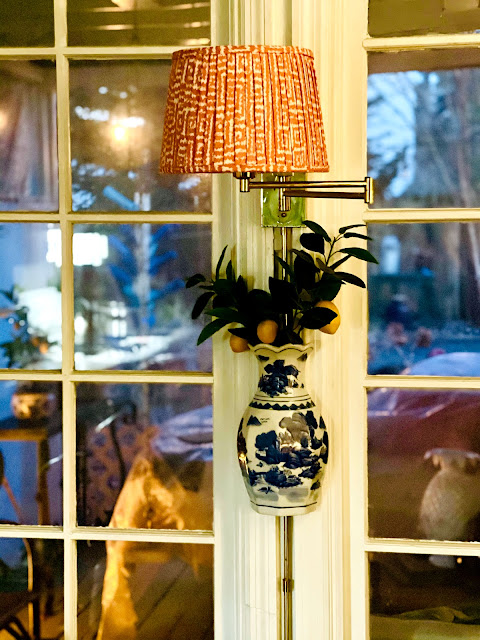 That's it - your cute (faux) pleated lampshade is ready to use! 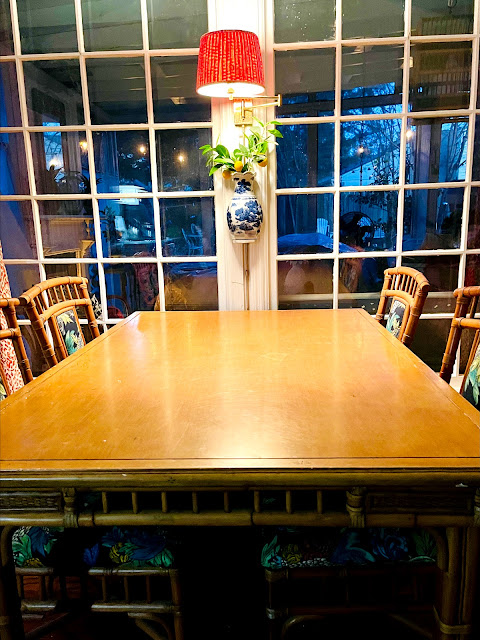 At night my shade looks a little darker with the light on
but it looks so charming glowing at the end of the table. 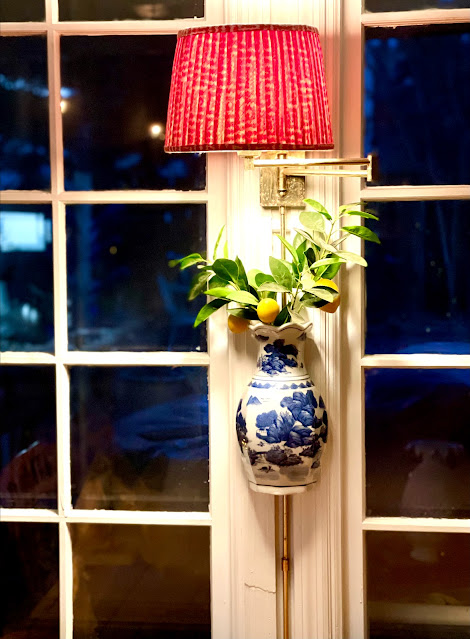 Be sure to share if you make one too!

Fresh flowers are one of the greatest joys of summer living - whether you can pick a complete arrangement from your yard or if you simply ad... 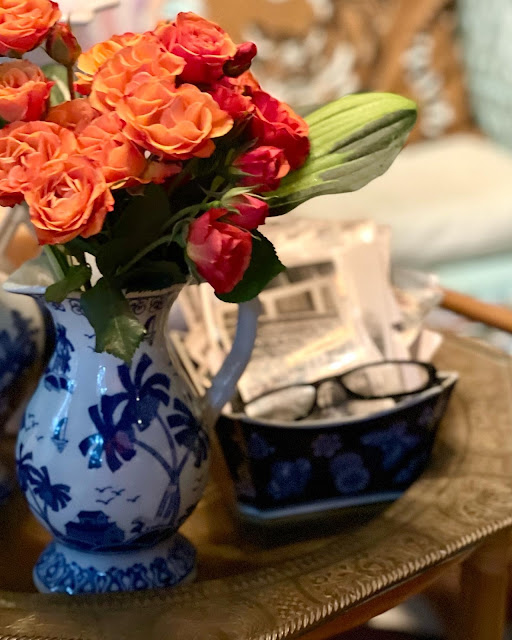